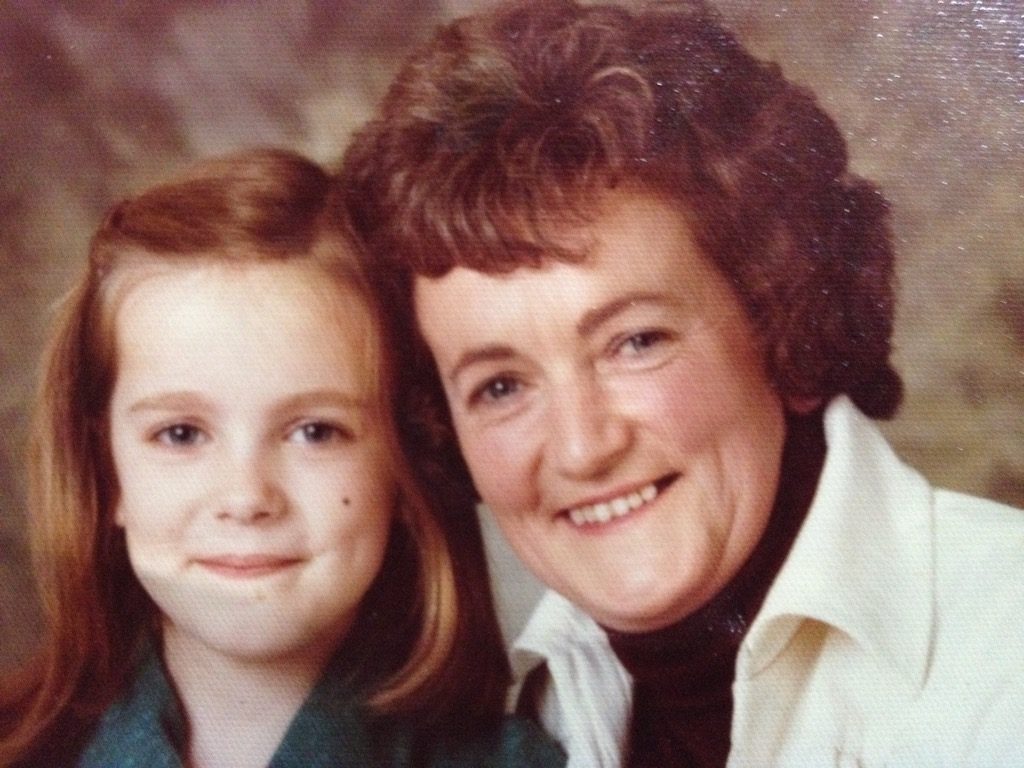 This is a very personal post and I hope you don’t mind me sharing it amongst my usual blogs about communications.  I want to help raise awareness of the importance of music in the lives of people with dementia, and share some helpful links.

My Mum passed away eight months ago, in a wonderful care home where thankfully, music was part of every day. I promised I’d write a blog for the fantastic Music for Dementia 2020 campaign – and now seems a good time to publish this, as music and dementia is one of the themes of today’s BBC Music Day (including the launch of BBC’s Music and Dementia campaign). Here’s the story of me, my Mum, music and dementia – with some tips and links for others living with dementia as part of their lives, or the life of a loved one.

My Mum never considered herself musical. She played the piano, sang beautifully, and music and dancing were her two main passions, but she was always self-effacing and happy to let others shine. She loved to talk about music and enthuse about her favourite musicians, groups and musicals; and to hear her four daughters playing music on instruments, on the radio, or through our many and varied devices (this was the 1970s, when ‘devices’ were motorised, or electronic, and either way, somewhat clunky).

My Dad loved music too and had a gorgeous singing voice. Enjoying music together was an important part of their lives: from their early dates, dancing to big bands; to having a night off from being parents and seeing singers at local ‘dinner and dances’. My sisters and I were sometimes allowed to go too, my eyes like saucers as I watched the singers work their magic on stage, and the grown-ups get increasingly tiddly. When they retired, they would visit the occasional musical in a larger town or even in London (a big trip for them, from rural Gloucestershire where we lived). 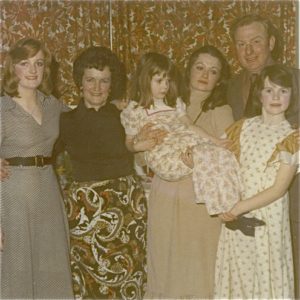 I consider myself so lucky that music ran through our family’s life. And some of my favourite memories involve music. Sunday evenings doing the washing up after tea, with my older sisters listening to and arguing about, the Top 40. The Osmonds vs David Cassidy, Bay City Rollers vs Suzi Quatro … and then glued to the TV on a Thursday evening for Top of the Pops.

Instrument practice and records playing in the ‘back lounge’ – Beatles, Rolling Stones and generally any ‘hippy’ record played by my sister Sue; guitar, piano and singing for my sister Elaine; and violin (short-lived!) and piano for Karen. All of us played recorder – compulsory in most primaries in the ‘70s. Mum was so supportive of any music we were involved in, from pantos to choirs, school concerts to going to gigs.

Mum’s musical tastes were eclectic too: as an 80-year-old in 2008, she was listening to Status Quo, Joe Loss, Chopin, Fleetwood Mac, Frank Sinatra, Shirley Bassey, Andrea Bocelli … all sorts of genres of artists and composers. And she was still coming to gigs with me. I have lovely memories of the last few concerts with her – Show of Hands at Gloucester Guildhall (her favourites), and Seth Lakeman at Gloucester Cathedral – sharing praise and comments, ‘did you see’ and ‘wasn’t that amazing’, united in a musical high.

As Mum’s dementia advanced, and at times she fell silent for hours, it was music that reconnected us. Playing her favourite music on her CD player was like switching a light on – her eyes glowed, there would usually be a smile, and often if I was lucky, a tapping of feet or hands and some singing. And then I became quite the showgirl (very much not my natural character!), bursting into song at any given moment, gesturing to Mum to join in. One memory that always makes me smile is me and Mum doing the washing up and singing ‘Hey, big spender’ at the top of our voices, with me trying to imitate the Bassey growl!

So when Mum finally moved from her own home, into the Old Rectory Care Home at Longhope, it was important for us to make sure music continued to be part of her life. 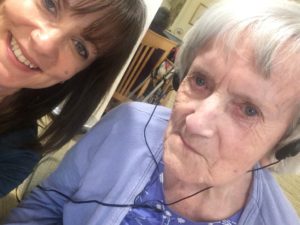 First of all, we wanted Mum to continue to enjoy the music she loved and remembered. I’d read a lot about music playlist initiatives in the UK and US, including seeing wonderful videos of the very instant effect of familiar music (see below). So we recorded her favourite music initially on CDs, until she refused to put on headphones. She didn’t understand what they were.

Thankfully we found the fantastic Simple Music Player for Dementia, which is a bit like an old-fashioned radio that you can upload your own MP3s to, and has a large play/next track button to make it easy to use. The care team at the home made sure that Mum’s music was on in the background every morning and evening as they helped her with her routines, as well as at suitable moments during the day.

Very soon, we realised that music was naturally a big part of life in the home, thanks in large part to Lin Partis, the activities co-ordinator at the time who is a keen singer and choir member.

Singing happened in spontaneous ways throughout the day: as things came up in conversation, during a quiz or activity, or to help residents to do something like folding napkins or walking to the dining room. Bursting into ‘Oh what a beautiful morning’ or ‘When the rob, rob, robin …’ at a moment’s notice brought smiles, laughter, and joining-in, especially from Mum!

There were also organised music activities, from group singalongs a few times a week, sometimes involving tambourines, maracas, castanets and triangles; to outside entertainers once a month or so. John the music man, a local organist, was a particular favourite (almost as popular as Matthew the armchair fitness instructor), as were Drybrook Ladies’ Choir and the Life of Riley Duo. Others included ukulele bands, local school choirs, local soloists and accordion players. At those times, we sisters often attended too, and when we joined in any singalong, Mum’s face lit up with joy.

A case study for A Choir in Every Care Home

A few years after Mum moved into the home, Kathryn Deane, a colleague and friend, and at the time director of Sound Sense, the association for community music, was involved in ‘A Choir in Every Care Home’ initiative and I told her about my Mum’s experiences. She asked me to interview Lin and write it up as a case study which care workers, home owners/ managers, and others may fine useful. You’ll find it on page 30 of the Case Studies of Singing.

Mum’s diagnosis and move into the care home was devastating. I saw her slip away every day, and felt that I was losing not only my beloved Mum, but also the cheerleader for my music-making, and the inspiration and driving force of my own passion for music. Every day, I felt the deep horror of loss: connections severed, words disappearing into silence, and my Mum slipping away from me. A long, slow grief.

But music gave us brief moments of deep connection and joy that are hard to explain in words. So I’ll finish with a very simple, but wonderful memory. During one particular afternoon, we’d been joining in a singalong, and Mum had smiled, and looked at me; sung and tapped her feet – unremarkable for most people, but remarkable at that time for Mum who by then was almost non-verbal. And she smiled, turned to me, and said “We love each other, don’t we?”.

Some resources I found helpful:

BOOK: Creating Moments of Joy for the Person with Alzheimer’s or Dementia

WEBSITE: Music & Memory – the playlists for dementia initiative that started in the US

WEBSITE: Playlist for life – the playlists for dementia initiative that started in the UK

VIDEO: Henry – how an elderly man with dementia responded to his music on an ipod

You can also find out about the power of music education, on our Music Education Works website.

Posted in Blog and tagged A Choir in Every Carehome, alive inside, BBC Music Day, music and dementia, music and memory, Music for Dementia 2020, music for wellbeing, playlist for life, Simple Music Player for Dementia