“Anita has given the Alliance for a Musically Inclusive England a visible external presence to support its reputation and credibility; developed a clear communications strategy; and increased understanding of communications amongst the network of funded organisations.” Carol Reid, Programme Director, Youth Music.

Carol Reid, Programme Director for Youth Music*, approached Anita in March 2019 to ask if she’d be interested in providing communications strategy and co-ordination for The Alliance for a Musically Inclusive England (AMIE). AMIE was a collective of 13 organisations, working together to promote equity in music education, and to support others such as music services and music education hubs, to do the same through advocacy, CPD, resources, and strategic alliances.

Anita was familiar with the work as she had previously been part of the team that evaluated the Musical Inclusion programme. This led to a report, The Power of Equality, which informed the development of the next phase of the programme, which eventually became AMIE. The team comprised Kathryn Deane, then head of Sound Sense, Phil Mullen, community music trainer and inclusion specialist, and Rob Hunter, community education consultant. Anita’s main role was to develop a community of practice through communications including social media and events

Anita worked with the 13 organisations and Youth Music over the course of a year, to help them to communicate about the Alliance, win hearts and minds for inclusion, and share learning from the programme.

The initial communications strategy encompassed guidance and resources relating to:

As a result of the work, the 13 organisations were more active, consistent and clear in their communications about AMIE, and in many cases increased their understanding of social media and content marketing. Youth Music saw increased engagement with AMIE content on their social media channels. The impact of the programme as a whole has yet to be assessed. 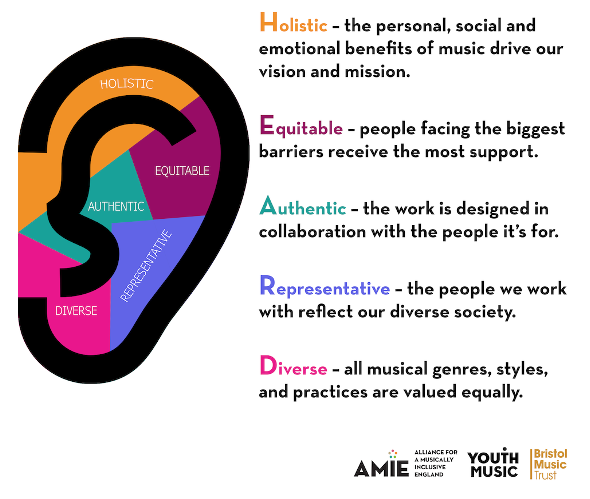 * Youth Music is a national charity investing in music-making projects for children and young people. Its insights, influence and investment in grassroots organisations and in young people themselves means that more 0–25-year-olds can make, learn and earn in music. It is funded thanks to the National Lottery via Arts Council England, players of the People’s Postcode Lottery and support from partners, fundraisers and donors.