Last month I ran a short Twitter campaign called #mymusicaljourney. I wanted to demonstrate a way of getting interest on social media that perhaps we don’t use enough in the music education/music for wellbeing sectors. It was also an experiment, as I wanted to test what worked, and what I could learn and pass on.

What the campaign was all about

My idea was to run a campaign that would appeal to hearts more than minds. It would:

There were a few reasons why I chose to focus on people’s musical pasts:

This wasn’t a campaign to spark behaviour change: more of an experiment to encourage engagement and awareness. 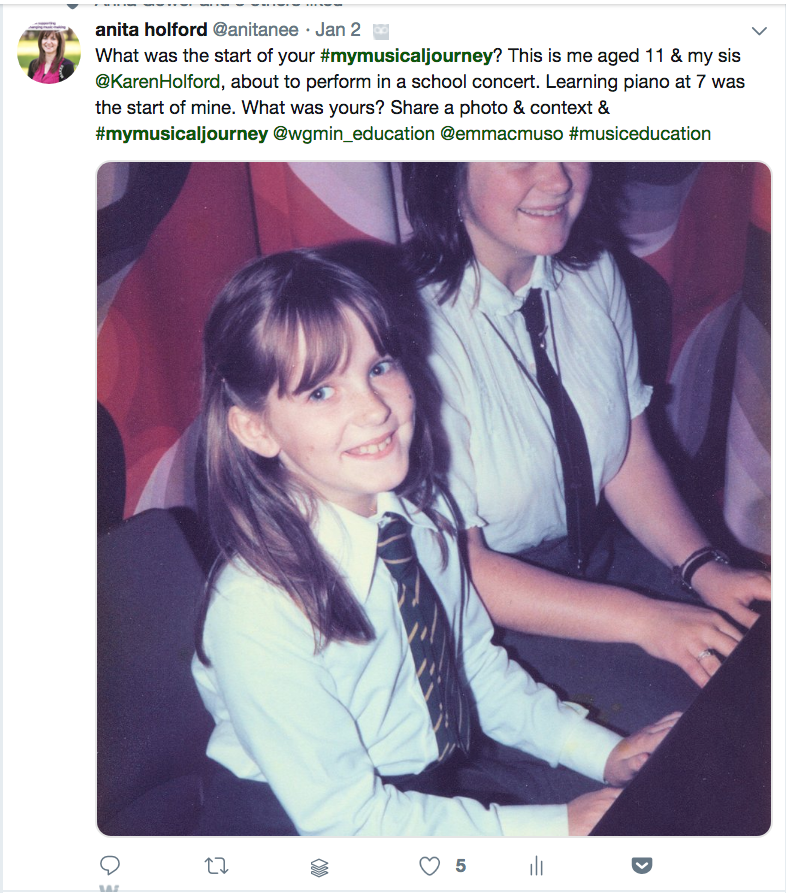 The campaign ran for 21 days from Weds 2 to Tues 22 January on Twitter*. I started by sharing a photo of me with my sister, @karenholford and giving a bit of context.

I then retweeted this with a bit more context – so people could see the photo and the original tweet, along with the reason behind it. My sister shared it too, and commented – so it was seen by her followers.

I shared these posts again a few times a day for a few days – using Buffer to schedule some of the posts, on different days/times to increase the likelihood of it being seen. I used slightly different copy each time, and/or added emojis to bypass the ‘no repeat content’ rule.

LEARNING/TIP: I felt uncomfortable sharing my own photo so often, so probably didn’t share it as often as I should have. Although it can feel too persistent to share so often, it’s important to do this to make it more likely that your post will be seen at the different times of days/days that people check their feeds. Are you posting your content frequently enough?

I then replaced my photo with a series of different photos, edited to make them look a bit more interesting. I used a couple of personal photos as well as the photo site Pixabay, but wasn’t able to find any suitable images of BME young people making music.

LEARNING/TIP: Having images representing all types of young people – black, white; smart, scruffy; disabled, non-disabled etc, is so important. How we present music education through images can make the difference between some thinking ‘that’s for me’ or ‘that’s not for me’. Could you plan ahead to make your image bank more diverse? 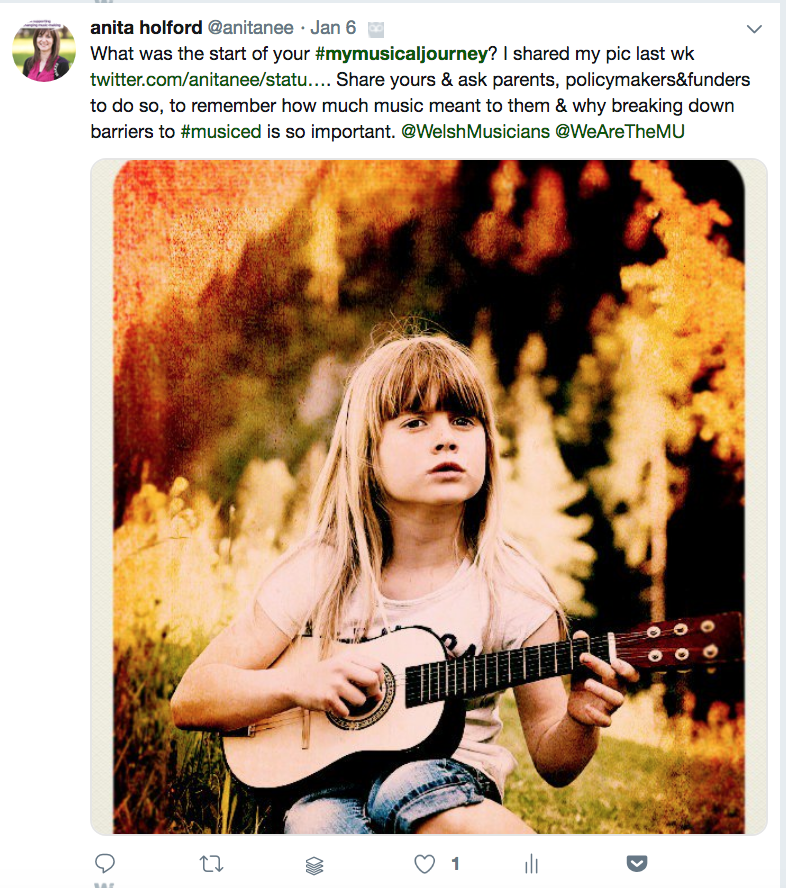 I also @tagged people and organisations into the posts. When you do this, the post shows up in their ‘notifications’ feed so they’re more likely to take notice. If you want to take this a step further, you can direct message people to personally ask them to share your posts. 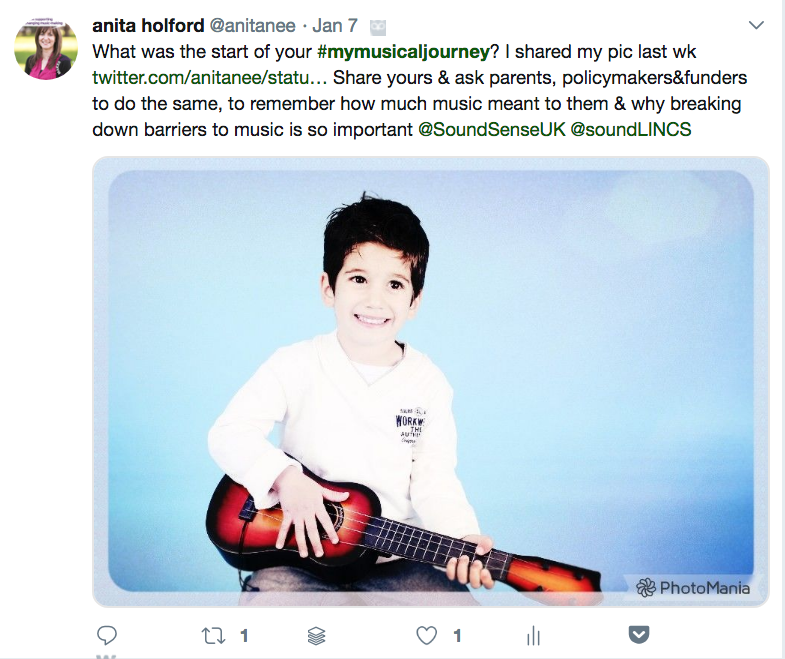 I then used the same technique of retweeting original posts and giving more context or thanking and encouraging people to take part. 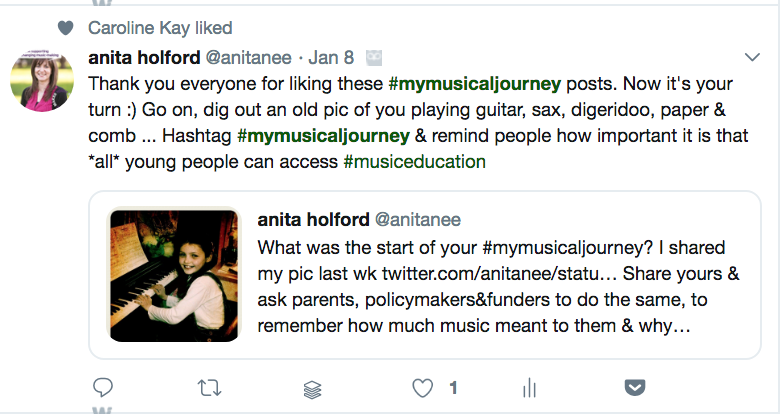 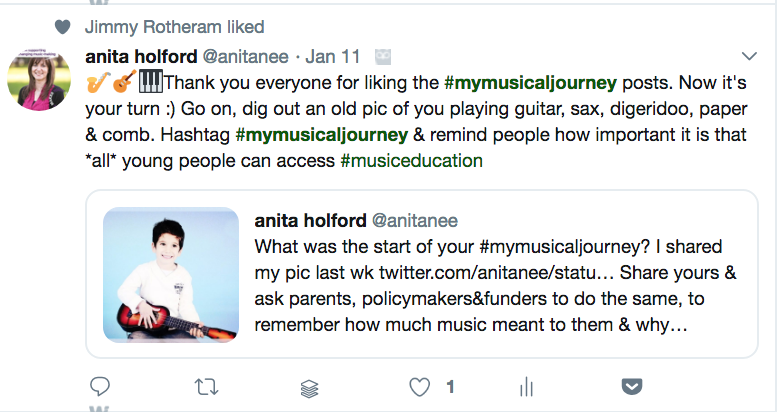 It started slowly, with lots of likes including from some national organisations in the sector, and a few comments, but no-one yet sharing. The first comment was from Ruth Jones @RuthJ1 who works for Trinity College/Arts Award and Wiltshire Music Connect:

I replied to the comments, encouraging people to post – something that’s really important in getting engagement.

There were no shares for days, but then, prompted by a photo share by Simon Glenister, CEO of Noise Solution @NoiseSolution1 at 10.42am on Friday 18th January, the shares started to happen. 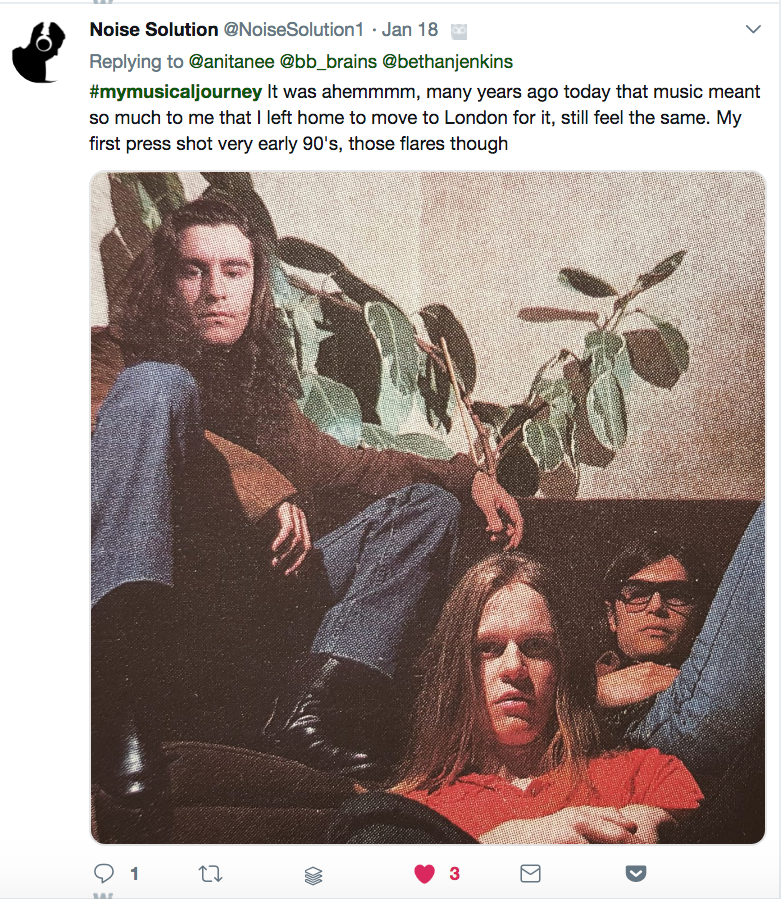 That day was the busiest day, with shares and comments from:

This was then followed on other days by photo shares from: 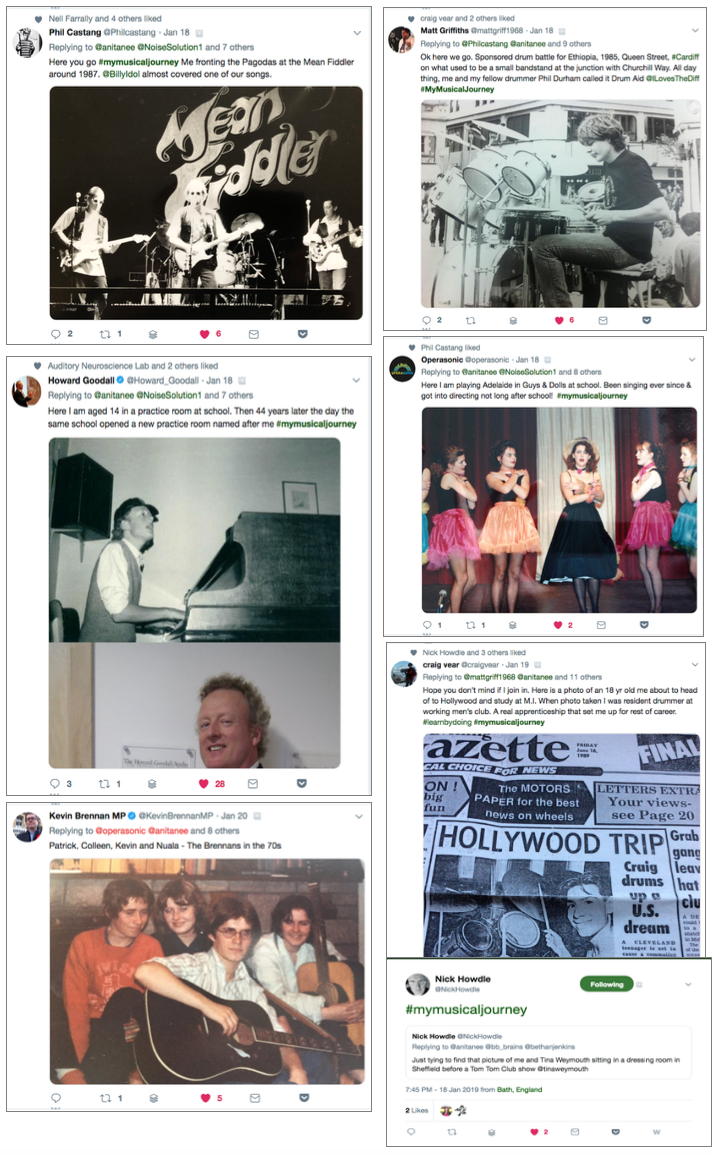 I responded with thank yous, and reshares. In some cases, I asked a further question, to prompt conversation.

LEARNING/TIP: Social media is meant to be social. Encouraging a conversation, rather than just posting, prompts engagement (which means your posts are seen as popular, and shown to more people) as well as leading to richer communication with the people in your network. Could you ask more questions, and think of your posts as conversation starters? 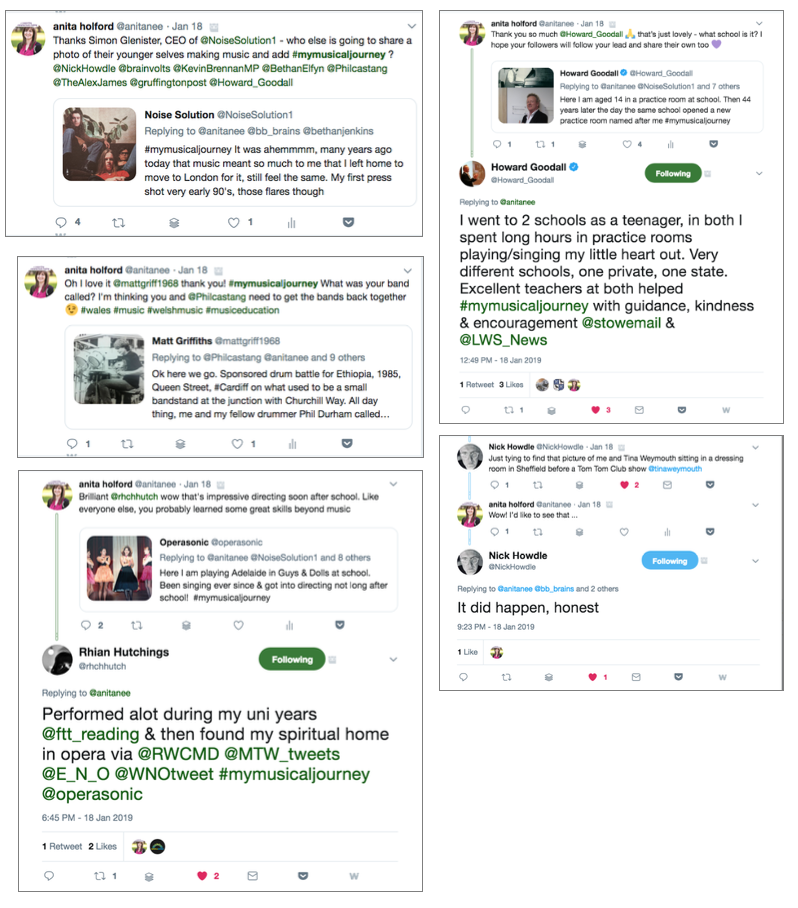 Simon’s post ended up having a separate life, on Facebook too. He posted about the campaign on his personal Facebook page, and got 46 comments and 54 reactions. Although this campaign could have been more powerful on Facebook as it’s such an engaging and personal medium, I wanted to reach a wide range of people including influencers and business leaders so Twitter was more appropriate.

LEARNING/TIP: It’s worth considering if you could focus your efforts on one channel for certain campaigns. Perhaps you want to reach a certain audience that your Insights/Analytics show are in greater numbers on that channel; or you want to make the best use of time, so that you can create copy/images/graphics/videos that are right for that particular channel?

What were the results?

I downloaded my Twitter Analytics for the 21-days of the campaign and removed any data from tweets not connected to it (although in fact seeing data for other tweets during the time of a particular campaign can be useful, because if your tweets are getting good engagement, it will make it more likely that other tweets your posting will be shown to more people).

LEARNING/TIP: To find your Twitter analytics, hover over your profile photo top right of your Twitter page; click the drop down, and scroll down to click on Analytics. You’ll see a summary, and then you can also click on Tweets, Audiences, Events, More to get more detail. You can also download it as a CSV file. 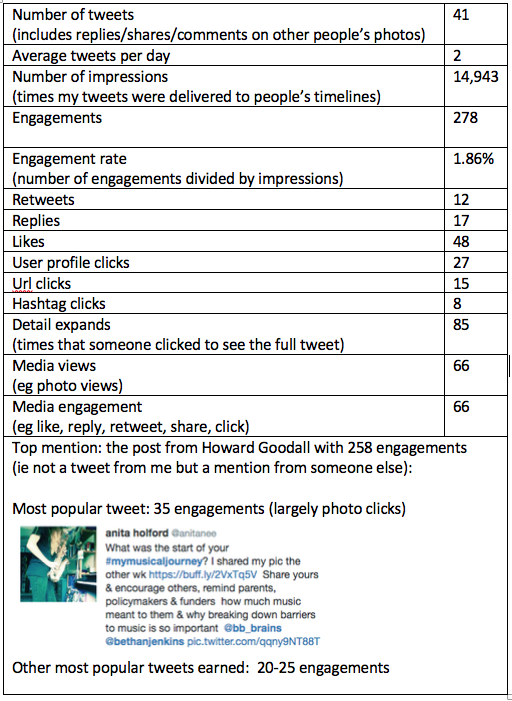 Compared with my usual Twitter activity, this achieved better impact in terms of engagement rate (mine is usually around 1-1.5%; the average engagement rate for non-profits is 0.15% – this is the nearest benchmark I’ve found but should be treated with caution as charities are very different from music education organisations). It achieved my best-ever level of engagement through a mention as a result of the tweet by Howard Goodall. It is difficult to track the true impact without seeing the results for other Twitter accounts that got involved.

The campaign didn’t get as much participation as I’d hoped, with only seven people sharing their photos. But it did require people to put in some effort: requiring people to dig out old photos and convert them for electronic use could have put many people off. A longer campaign, or an easier request, may have improved results.

The big lessons for me were in the concept of the campaign and who it impacted, because it didn’t reach beyond the music education community. In future similar campaigns, I would recommend:

1. posting more often than twice a day at a greater range of times – this would have meant the posts would have been seen by more people

2. pre-planning in more detail (I have to admit, this was one of those ‘just do it’ moments when it started) – making sure to have a bank of interesting, diverse images; and also video or video slide-show to attract attention (it’s easy to make one using Adobe Spark or Magisto and there are free options);

3. starting with a blog post that could explain a little more the thinking behind the idea and what people could do; also crafting the messages more carefully including a short sentence that people could share to explain the concept

4. asking people to tag friends and colleagues, particularly those outside of the music education sector, and particularly these three groups: influencers, successful people who we may not expect to have a musical background, and those with large followings

5. contacting people from those three groups directly (by instant message) to ask for help and explain the concept, linking to the blog

6. asking people to share a sentence, consistently, that says what the purpose is (to remind parents, policymakers and funders how much music meant to them and why breaking down barriers to music is so important)

7. setting aside 10 minutes each day to keep an eye on the campaign and engage people in conversations about it – and the wider issues (this is really important and was missing from this campaign)

8. having a more direct purpose/ask to the campaign. This wasn’t suitable for this campaign, as I don’t work for an organisation – but I’m others could create their own take on this model and get even better results.

If you decide to run your own campaign, I’d love to hear what the results are and what you learn. With your permission I’d be happy to share it more widely to help others in the sector.